This section allows you to view all posts made by this member. Note that you can only see posts made in areas you currently have access to.

Well, NafNaf was working on Eastwatch-by-the-sea, though I have not heard anything from him in a long time. I'm pretty sure no one is working on Shadow Tower. Though, Produno knows better.
#4

December 02, 2017, 09:50:10 AM
Strolling through scenes because I forgot the name of one prop, I found a few props misaligned in Thenn Valley village. 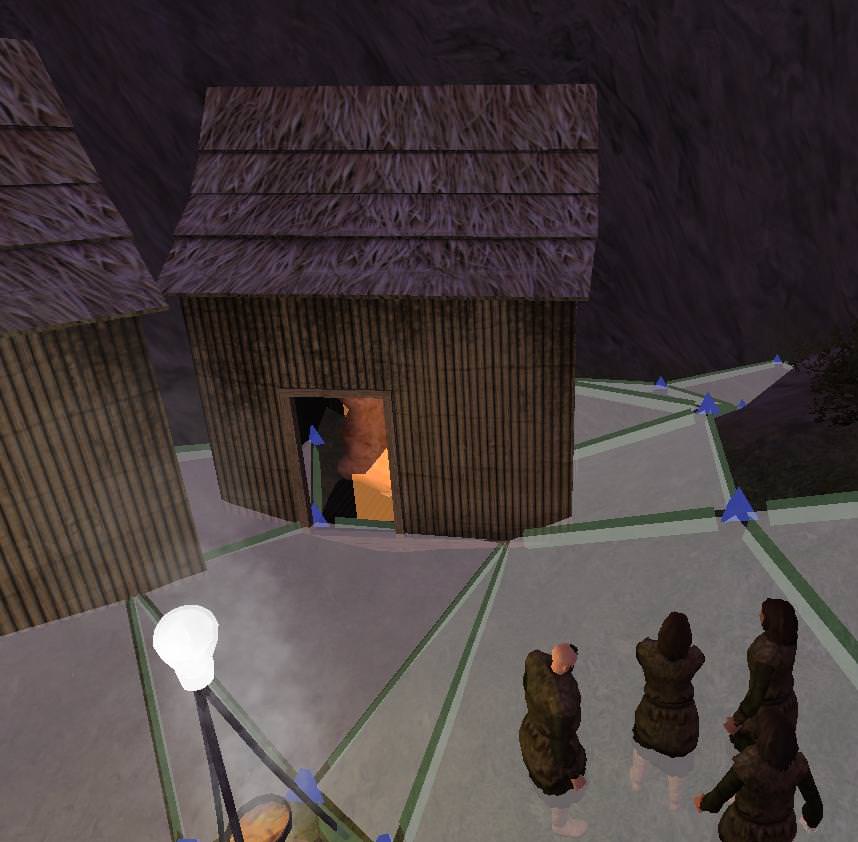 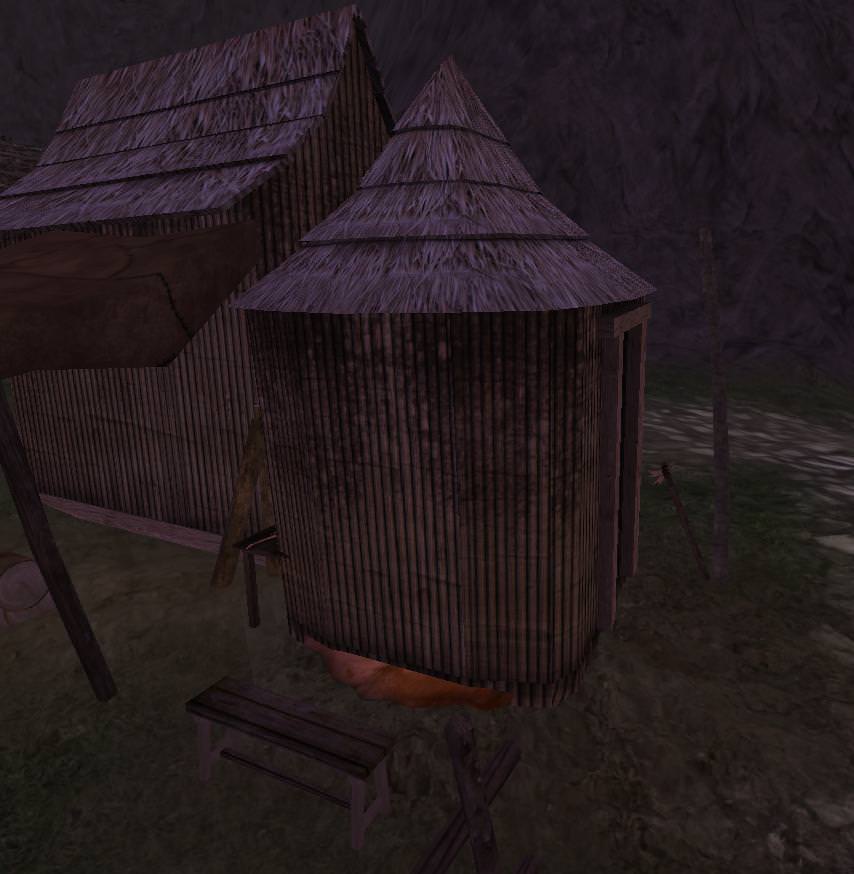 [/spoiler]
I may have moved them at the last moment before release, as I was in a hurry before 2.0? I can't remember. Anyway, one house was incorrectly replaced with it's smaller analogue, causing in-house furniture to stick out of it and fly.  2 houses were also misaligned and looked bad. I fixed all this, also added a few of those nice z_ props with live animals and villagers.

Here is the fixed version:
https://www.dropbox.com/s/qvtq534nv5to8wx/scn_village_43.sco?dl=0

A World of Ice and Fire / Re: MOD OF THE YEAR AWARDS.

Just in case you are still looking. Sunspear shipmaster is in quite a peculiar position. When you start, go straight ahead to main keep with a big tree. As soon as you see it, do a 150 degree turn left and go to the keep on an island. It will have a long bridge to it. When near island keep, you'll see a big ship. That's where shipwright is. But he is on the other side of the river. To get there, turn right once you got on the island and pass through a gatehouse. It's portcullis will be open, unlike others. Then turn  left and go along the shore. On the first pier leading to the ship you'll see the shipwright.

Map for simplicity.
[spoiler]
Blue is main inland keep with a tree. Yellow is path from starting point. Green is the shipwright. 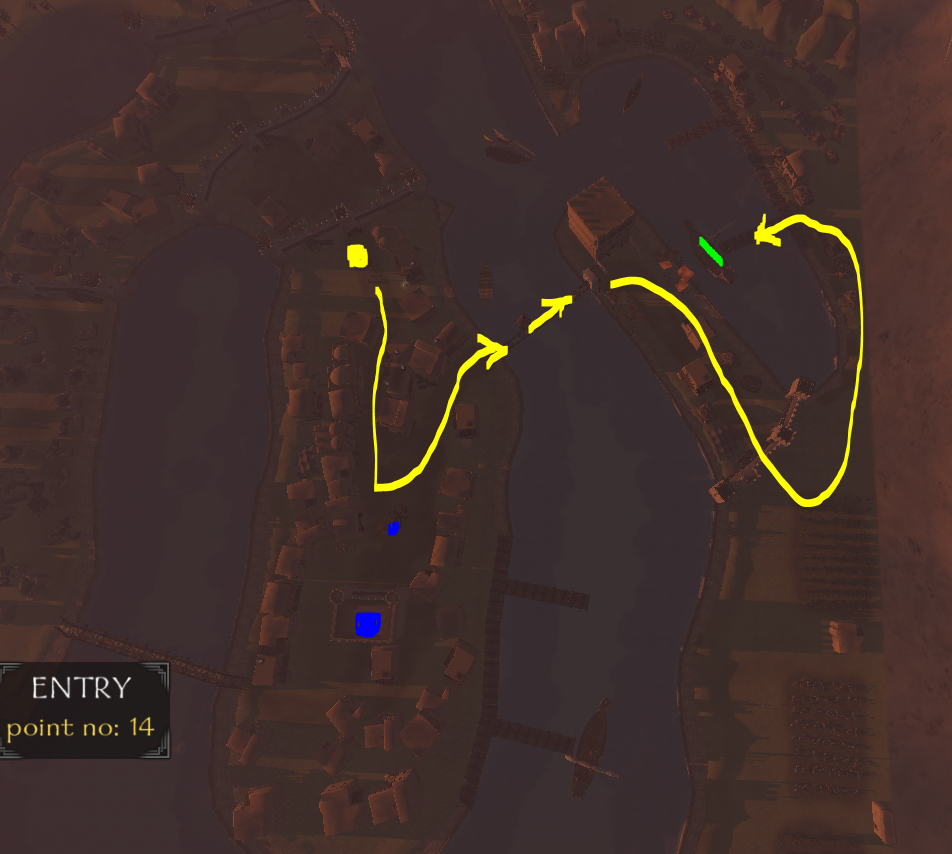 A World of Ice and Fire / Re: Right to rule

Sceners Guild / Re: Tales of Playersettlement: bragging and expectations.

v2.0 / Re: Bugs and issues I've encountered so far

Quote from: Luka_Mijic on November 01, 2017, 10:12:36 AM
19. Mounted troops holding a banner don't attack nor do they defend themselves. They are literally a punching bag.

Sceners Guild / Re: Tales of Playersettlement: bragging and expectations.

The only thing I wanted to report, is that passages don't work.  There are no passages from the outside (at least in old scene, maybe it works like castles, havent experimented yet) and the passage from inside player's house leads you nowhere. If you click it, it does nothing. And after you 'tab' out the scene, it asks you about demolishing the settlement.
#12

The 'sceners guild' section is almost empty and forums are half-asleep. So, I thought I could liven up them with my plans and bragging.

I am currently working on the scenes for the player's settlement - a quite handy feature, that allows you to have our own fort, even in the middle of your enemies' lands. The settlement has 4,5 levels of it's construction, every one of which adds new advantages for the player. I am going to remind/explain how each of them are different, because why not. I originally created this for myself, which made scening much easier, as opposed to drawing plans on paper or making scenes with no plans at all, but then decided to tease you with it. The maps are very rough demonstration of the planned buildings, some aspects may change.

Level 1. The first level of the settlement is merely a glorified fortified camp. It gives the player ability to garrison 50 soldiers, rest with them. Building takes 6 hours and a few thousands of stags. The only staff member is your loyal captain. Defence advantages are very minor, but better than an open field. Which is a significant advantage against a dothraki horde.
Commander's tent is built upon a small hill, while most soldiers camp on lower ground. 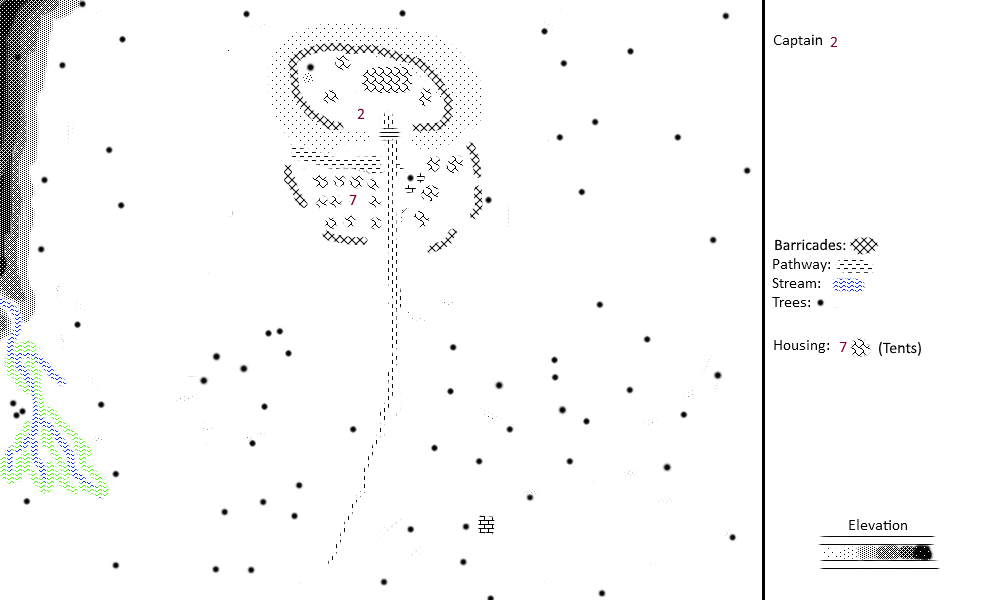 Level 2. The fortified structure that is the second level is provided with a palisade. The palisade isn't truly a wall (which troops can't stand upon), but it helps you narrow enemy forces and gives protection against archers. A moat is dug around the palisade. Hosts 50 soldiers

The player gets his very own house built atop of the hill, where he can rest and store loot. A priest of chosen faith can give you advice in religious matters. The tavern is built in the settlement, where soldiers go to relax. 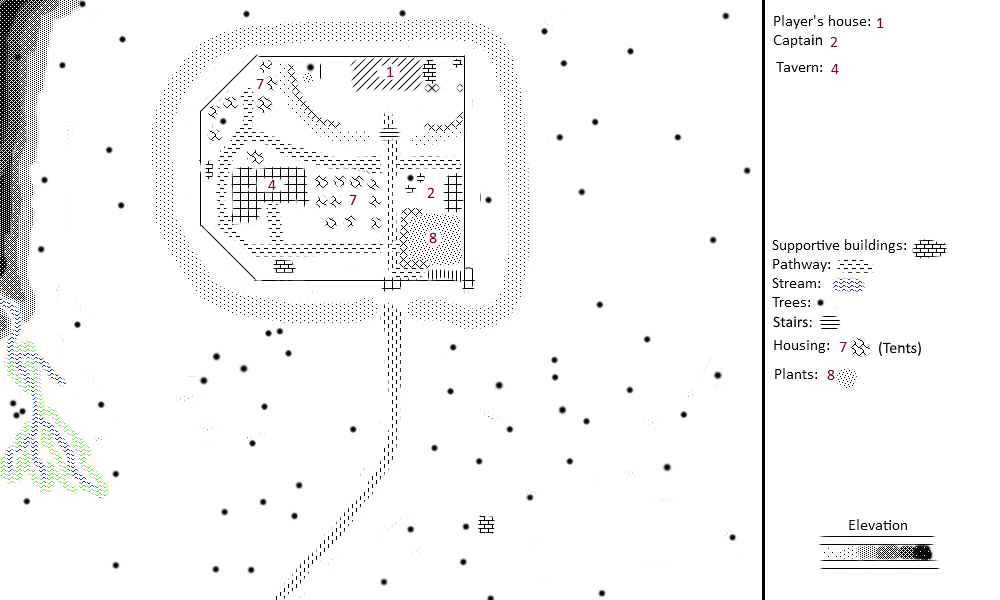 Level 3. The palisade turns into a wall, which now can be properly stood upon. This allows you to rain arrows on enemy soldiers, while infantry holds the gates. The additional space allows you to garrison 120 soldiers. Man at arms, an old soldier, can now be hired to train your recruits. A prostitute can be hired in the tavern to diminish the awareness of your troops. A bard to entertain you and a healer can be hired for your house.

All this good stuff can be built for 5 items of timber, 5 packs of tools and 5000 of silver stags. 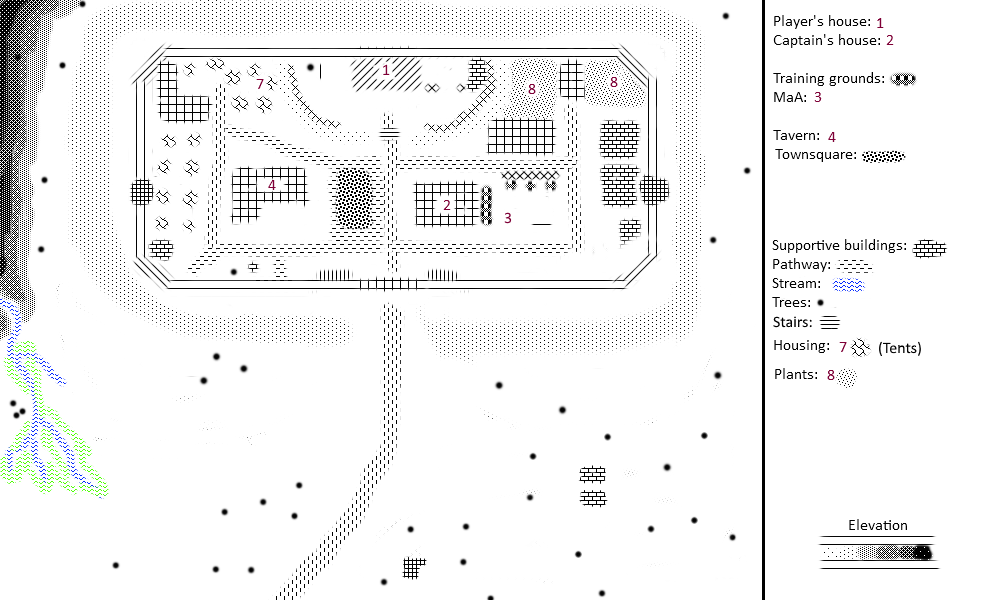 Level 4. Now this is a real fortress! The wooden gatehouse and a bridge over a moat narrows attackers even further, while rotation of walls allows archers to shoot at enemies much easier. Towers support the corners of the walls. Soldiers now have proper barracks and training site for them which allows you to garrison 250 units. Armourer and a weapon smith are hired to help you sell and buy equipment.

Player's house gets extended with a tower. Food supply of the fortress gets improved, which allows you to hire a cook and hold feasts at your residence! This is the final stage, so defender advantages are maximized.

All this costs 5 more batches of timber, 5 packs of tools and 10k of silver stags. Construction takes 2 weeks. There is also a transition scene between lvl 3 and lvl 4, where you can see how the improvements are being built. 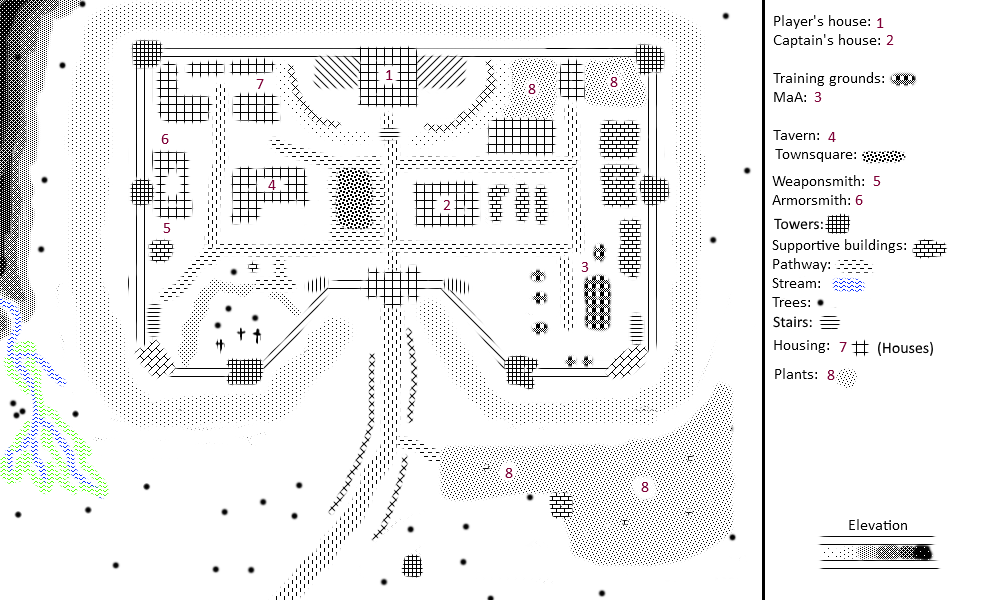 Most of these features were already there, my job is to make them look good in the scene. This design was inspired by amazing quest of Kingdom of Amalur, where player gets to rebuild a ruined castle.
Thank you for reading all of this! If you have critique or suggestions to include something in the scenes, I will be happy to hear your opinion and answer the questions you have.

A World of Ice and Fire / Re: moderator

That's a Brytenwalda scene, so it will be replaced at some point anyway...
#15